Punkvert are curating films during Summer 2019 at the Convoy Cabaret Tent at Bearded Theory May 2019, Convoy Cabaret Naughty Corner June 2019 and Griffstock July 2019.

Films being shown include -

"Sawdust for Brains and the Key of Wisdom" Jo Wonder 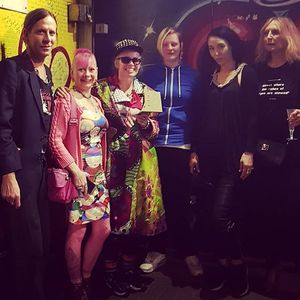 "Video was awesome! Aphex Twin meets League of Gentlemen, but weirder. Can’t wait to see it again!!! So Pro (0;"

We most enjoyed the audience reaction. It was a first view for the cast too. Enormous thank yous to our stars Jenny Runacre, Sobriety Twist, Sexton Ming, Peter Kopinski - our intrepid reporter and supplier of the Clown Catchers van, Jan Daniels - who not only performed three roles, but made great special effects and giant heads, Stella Meltdown - Group Leader of Clowns Anonymous, Ella Guru - funkcutter's fearless stunt double, Andrea Pyke, Nik Llawr, Amanda Hull and all the other people who gave up time and space, like Knox & Marie at Rock n Roll Rescue, The Dublin Castle, Overdrive Studios and particularly Ron & Jenny for locations in Kent and Deptford & use of the lovely Lily Mars. Not to forget Steve Teers for use of his DVcamera. Biggest of all thank yous to our very own Black Triangle, film maker Lindsey S. : thee most Premier of Pros and also to Pink Charlotte & Nigel Camp for additional filming, the video editing suites and continued support throughout this project.

Bomb in a Luggage Rack (2017) by Black Triangle & anarchistwood