It was meant to be released on 22nd Nov, then winter solstice, but finally it gets released at the start of a new Gregorian calendar. Ladyboys and geezer byrds, ex gratia recordings is proud to present DONKEY WANTS YOU DEAD by Jude Hagg. As with all things from the mind of Sexton Ming, best leave it to your own descriptions, but it's s steal at four pounds sterling. Expect more from Ming over the next year. That seaside air makes him frisky. 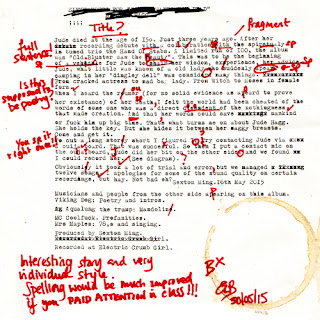 A strange time of the year, here at the Labitory (as if there is ever any other), on the 7th of Jan, it was the day we burned the snowman. It snowed on the day. Very messy. On said day of this year (common era), Mr Ockenden from Reality Check would have been 50 years old, apparently. I say it like this, as looking it up may make me consider being a responsible grandparent. sheet. Check out some of what he left us here.

A mutual friend I have with Mr Ockenden (who I wrote about before), lives over in Belgium. A popular destination for media coverage over the past few months. Just when I was thinking it was all bombs n' state stuff, those good folks over at Hypertension Records sent us COCAINE PISS - nice trashy punk n' roll, with a high pitched DIRT, dada banshee thing a hollerin'. All good stuff and highly recommended for tube journeys and general jumping about in a free and salacious manner. Would love to see these folks live.

Back to the war though, happy new year xx