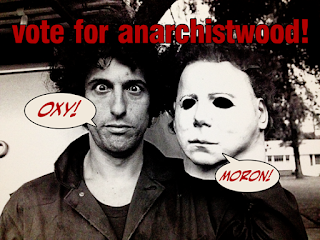 
Between the age of 9 and 11, I was prone to be bullied. Displaced in a shitty farm town, where I wasn't allowed to fit in. I lost myself in comics, music and the newly discovered world of VHS video - where you could take the film home!

My mum had a part time job there and through building up a rapport with the owner, I managed to get many titles underage. Classics from this period that let me escape the homogenised, redneck reality around me included Penelope Spheeris' Suburbia, Mark L. Lester's Class of 1984 and Escape from New York. I could watch any of those films up to three times a day, each viewing giving me more strength and stamina (and probably an uhealthy nihilistic bent).

All of them had the dog's bolloocks of soundtracks. A mixture of punk rock and electronic soundscapes. All very influential on anarchistwood. I managed to get the theme to Class of 1984 on 7" single. It took weeks to come, imported from Italy. The soundtrack to Escape from New York had extra interest for me, when I discovered that the director had also wrote the soundtrack. John Carpenter's output has always found a place in the house of Blackwood, since first getting the hots for Jamie Lee Curtis in Halloween. Searching out Escape from New York, meant a trip to our home city of Liverpool. I managed to find an imported cassette version (the last in store) in Penny Lane records. I wore it out within a couple of years. Big sythns and scary show tunes sung by the inmates of Manhatten Island. Most exotic for a prepubesent delinquent.

I find myself gobsmacked as it has came to my attention, that anarchistwood are at the top of 'who should support John Carpenter?' on Samhain this year, for one of the guardians of aleternative music, All Tomorrow's Parties. I expect that at some point someone with a manager will hit the poll heavy to make sure they get the slot, but until then... if you use Fb, log in and vote for the 'wood. I pormise we'll do the punk rock blues fuzz, complete with all the trashy cheap trick electronica thorwn in if we get it. 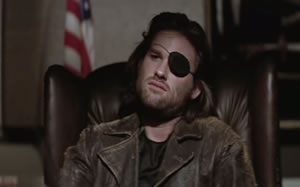 I don't give a fuck about your president - Snake Plissken, Escape from New York